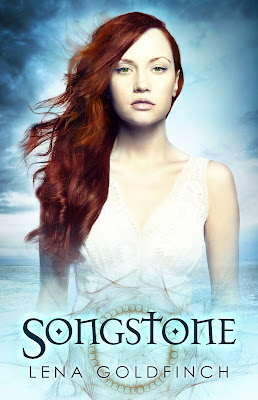 Seventeen-year-old Kita can meld song into stone, a gift greatly honored in a culture with no written word. However, she must hide her ability from the powerful village sorcerer who enslaves her. Ostracized and alone, she longs to escape her miserable existence, but each day her master's magical hold tightens around her.

Then Pono, a young journeyman, arrives from the other side of the island. In him, Kita sees her one slim chance at freedom—and she’ll risk her life to take it.

The story of a girl who yearns for freedom and a boy determined to be more than what's expected of him. Their desperate journey will leave them both forever changed.

"Songstone sings with characters who come to life, a story full of magic, heart and adventure, and a world that lets you smell the sea air and feel the tropical sun on your back."
(Lisa Gail Green, author of The Binding Stone)

The stranger was taller than me—though that didn’t mean much since I was shorter than most of the villagers—and he was younger than I’d imagined a journeyman would be, perhaps only a year older than me.

Even though we were in the woods after sunset, there was just enough light so I could see his eyes were a warm nut brown. If I could see him, I realized, then he could see me. I drew up straight and prepared for his eyes to widen at the sight of my ugly pale skin, my straight, slippery red hair, and my green eyes.

Would he be afraid?

I was preparing to rush past him, when he spoke.

“I am Pono,” he said, surprising me so much that my feet stuck to the ground.